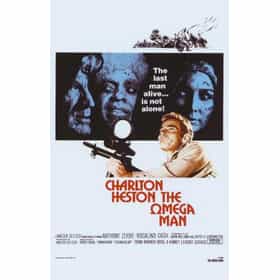 The Omega Man is a 1971 American science fiction film directed by Boris Sagal and starring Charlton Heston. It was written by John William Corrington and Joyce Corrington, based on the 1954 novel I Am Legend by the American writer Richard Matheson. The film's producer was Walter Seltzer, who went on to work with Heston again in the dystopian science fiction film Soylent Green in 1973. The Omega Man is the second adaptation of Matheson's novel, the first being The Last Man on Earth which starred Vincent Price. A third adaptation, I Am Legend starring Will Smith, was released in 2007. ... more on Wikipedia

The Omega Man is ranked on...

The Omega Man is also found on...