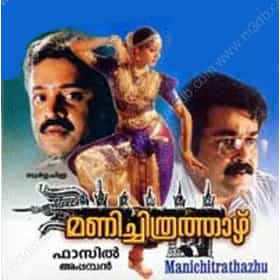 Manichitrathazhu is a 1993 Indian Malayalam epic psychological thriller film written by Madhu Muttam, directed by Fazil, and produced by Swargachitra Appachan. The story is based on a tragedy that happened in Alummoottil Tharavadu, a famous central Travancore family, in the 19th century.The film dealt with an unusual theme which was not common in Indian cinema at the time but it proceeded to become a high grosser at the box-office and it was critically acclaimed as well. Directors such as Siddique-Lal, Priyadarshan, and Sibi Malayil served as second-unit directors. The cinematography was by Venu and it was edited by T. R. Shekar. The film stars Mohanlal, Shobhana, Suresh Gopi, Nedumudi ... more on Wikipedia

The Ornate Lock is ranked on...

The Ornate Lock is also found on...