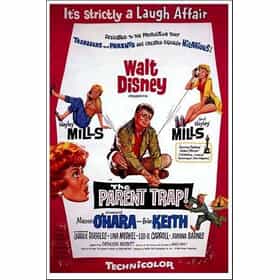 The Parent Trap is a 1961 Walt Disney film. It stars Hayley Mills, Maureen O'Hara and Brian Keith in a story about teenage twins on a quest to reunite their divorced parents. The screenplay by the film's director David Swift was based upon the 1949 book Lottie and Lisa by Erich Kästner. Kästner's novel was based on the 1936 Deanna Durbin film Three Smart Girls. The Parent Trap was nominated for two Academy Awards, was broadcast on television, saw three television sequels, was remade in 1998 with Lindsay Lohan, and has been released to VHS and DVD. The original film was Mills' second of six films for Disney. ... more on Wikipedia

The Parent Trap is ranked on...

The Parent Trap is also found on...