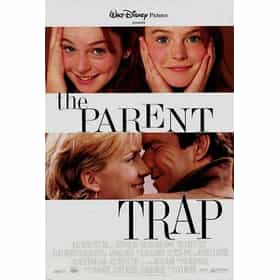 The Parent Trap is a 1998 romantic comedy film co-written and directed by Nancy Meyers, and produced and co-written by Charles Shyer. It is the second adaptation of Erich Kästner's German novel Lottie and Lisa following the 1961 film of same name, and stars Dennis Quaid and Natasha Richardson as a couple who divorce soon after marrying, and Lindsay Lohan in a dual role as their twin daughters, Hallie Parker and Annie James who are accidentally reunited after being separated at birth. David Swift wrote the screenplay for the original 1961 film based solely on Lottie and Lisa, but the story is comparable to that of the 1936 Deanna Durbin film Three Smart Girls, which inspired the ... more on Wikipedia

lists about The Parent Trap

18 Reasons The Parent Trap Is Actually Really Messed Up 219.8k views When was the last time you watched The Parent Trap, the Disney film featuring double-trouble Lindsay Lohan and a deep curren...

The Parent Trap is ranked on...

#351 of 582 The Greatest Film Scores of All Time 229.1k VOTES This list contains greatest movie themes and scores ever recorded, chosen by the Ranker community. (NOTE: This list is for f...
#128 of 302 The Greatest Soundtracks of All Time 137.9k VOTES The best soundtracks ever are more than just a collection of songs in a particular order; they evoke and accentuates th...
#1 of 94 The Best Movies for Young Girls 68.4k VOTES The films on this list of the best movies for girls have been ranked as the absolute best by the community, when it comes to...
#48 of 96 The Greatest Movie Remakes of All Time 17.9k VOTES The Greatest Movie Remakes of All Time, ranked by movie experts and film fans alike. This list of the top movie remakes of a...
#125 of 313 The Best Movies for Kids 200k VOTES If you have kids, you know you are always on the lookout for a movie that they will love and that you can sit through withou...
#61 of 66 The Greatest Female-Led Comedy Movies 2k VOTES Comedy movies for women feature larger-than-life characters, laugh-out-loud situations, and deep bonds of friendship. Need t...
#19 of 59 The Best Adventure Movies for Kids 6.7k VOTES List of best kids adventure movies. What are the top kids adventure movies? This is a list of the best kids adventure movies...
#4 of 14 Movies From Your Childhood That Taught You Bad Lessons 10.7k VOTES Kids' movies are typically supposed to promote wholesome values. Perhaps more importantly, movies are also supposed to ...
#17 of 18 18 Movies With "Happy Endings" That Were Actually Unspeakably Tragic 110.1k VOTES The ending of a film is meant to tie things up into a neat little package. But when you look at the “life affirming” and “ha...
#12 of 15 Comedies That Are Horror Films From the Supporting Character's Perspective 6.1k VOTES The most popular comedic characters all have one thing in common - they don’t care about anyone but themselves. They pu...
#11 of 22 Great Movies About Very Smart Young Girls 1.1k VOTES Solving crimes, acing tests, and bringing parents back together - smart girls can do it all. The top movies about sma...
#14 of 378 The Best Movies Directed by Women 31.4k VOTES It’s no longer just a man’s world out there, women have been taking over Hollywood for years in some pretty big ways and the...
#54 of 213 The Best Walt Disney Company Movies List 18.5k VOTES Here are the best Walt Disney Company movies, ranked best to worst, including trailers, genres, and release dates....
#42 of 285 People who voted for The Parent Trap... also upvote Gossip Girl on The Best Teen Drama TV Shows The Best Teen Movies of All Time 679.6k VOTES Need a new movie to watch? Here's a list of the best teen movies and films about teenagers, adolescence, and high school. Wh...
#14 of 68 The Best Movies About Summer 12.4k VOTES It’s summertime – the feeling is easy, it's the perfect temperature, time is spent laying on the beach all afternoon, follow...
#5 of 81 The Best Movies Set In The Great State Of Maine 328 VOTES Which of these movies about Maine are the best? It's time to vote up the best movies set in Maine, the Pine Tree State. Some...
#5 of 46 The Funniest Movies About People Who Are Pretending to Be Someone Else 778 VOTES This list contains information on the best comedy movies about people who are pretending to be someone else, ranked from bes...
#8 of 37 The Best Summer Camp Movies 2k VOTES A list of the best summer camp movies ever made, ranked by film fans' votes. This list is ordered by popularity, so only the...
#19 of 22 The Best Disney Movies About Love 968 VOTES This list is all about ranking Disney movies about love from best to worst by user votes. The best Disney movies about ...
#24 of 40 The Best Movies for 12 Year Old Girls 272 VOTES What films can 12 year old girls watch? They are not quite teenagers but still pretty far removed from being little kids. Th...
#16 of 33 The Best Romantic Disney Movies 1.7k VOTES These romantic Disney movies remind us of the magic held in a first kiss or the strength of enduring love. These are th...
#24 of 32 The Greatest Guilty Pleasure Teen Movies 1.7k VOTES Ah, teen agnst! From romance to friendship to academics, everything feels so much more dramatic when you're at tha...
#1 of 27 The Best Movies About Twins 2.5k VOTES A list of the best twin movies ever made, ranked by movie fans with film trailers when available. This twin movie list is or...
#2 of 21 The Best Lindsay Lohan Movies 4.4k VOTES List of the best Lindsay Lohan movies, ranked best to worst. Movie fans fell in love with a young Lindsay Lohan's adorable a...
#1 of 29 The Best Natasha Richardson Movies 375 VOTES List of the best Natasha Richardson movies, ranked best to worst with movie trailers when available. Natasha Richardson's hi...
#12 of 49 The Best Movies for 11 Year Old Girls 267 VOTES The best films for 11 year olds need to be a number of different things. First and foremost, they need to be engaging, moder...
#5 of 50 The Best Comedy Movies for 11 Year Old Kids 436 VOTES The best part about this list of comedy movies for 11 year old kids is that there truly is something for everyone. There’s t...

The Parent Trap is also found on...