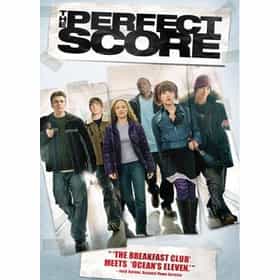 The Perfect Score is a 2004 American teen heist film directed by Brian Robbins, starring Erika Christensen, Chris Evans, Bryan Greenberg, Scarlett Johansson, Darius Miles, and Leonardo Nam. The film focuses on a group of six high school students whose futures will be jeopardized if they fail the upcoming SAT exam. They conspire to break into the ETS building and steal the answers to the exam, so they can all get perfect scores. The film deals with the themes of one's future, morality, individuality, and feelings. The Perfect Score has similarities to other high school films, including The Breakfast Club and Dazed and Confused, which are often referenced throughout the film. However, ... more on Wikipedia

The Perfect Score is ranked on...

The Perfect Score is also found on...