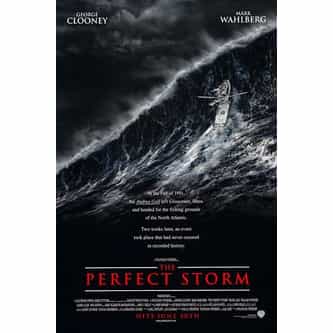 Tagline
Feel Its Fury.
In the Fall of 1991
the _Andrea Gail_ left Gloucester
Mass. and headed for the fishing grounds of the North Atlantic. Two weeks later
an event took place that had never occurred in recorded history.

The Perfect Storm is a 2000 American biographical disaster drama film directed by Wolfgang Petersen. It is an adaptation of the 1997 non-fiction book of the same title by Sebastian Junger, which tells the story of the Andrea Gail a commercial fishing vessel that was lost at sea with all hands after being caught in the Perfect Storm of 1991. The film stars George Clooney, Mark Wahlberg, William Fichtner, John C. Reilly, Diane Lane, Karen Allen and Mary Elizabeth Mastrantonio. The film was ... more on Wikipedia

85.7k readers Tragic Facts About The Perfect Storm, The Shipwreck Story No One Lived To Tell

The Perfect Storm IS LISTED ON