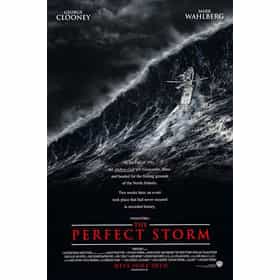 The Perfect Storm is a 2000 American biographical disaster drama film directed by Wolfgang Petersen. It is an adaptation of the 1997 non-fiction book of the same title by Sebastian Junger, which tells the story of the Andrea Gail a commercial fishing vessel that was lost at sea with all hands after being caught in the Perfect Storm of 1991. The film stars George Clooney, Mark Wahlberg, William Fichtner, John C. Reilly, Diane Lane, Karen Allen and Mary Elizabeth Mastrantonio. The film was released on June 30, 2000, by Warner Bros. Pictures. ... more on Wikipedia

Tragic Facts About The Perfect Storm, The Shipwreck Story No One Lived To Tell 82.8k views While the phrase "perfect storm" might suggest an event in which everything goes smoothly and no one gets hurt, th...

The Perfect Storm is ranked on...

The Perfect Storm is also found on...