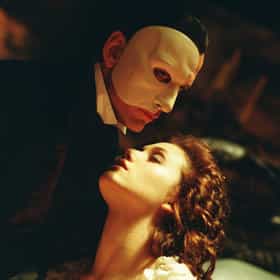 lists about The Phantom of the Opera

The Phantom of the Opera is ranked on...

#58 of 205 The Best Movies About Music 46.8k VOTES The films on this list of the best movies about music have been ranked as the best. This list features the best music movies...
#191 of 769 The Best Horror Movies of All Time 1M VOTES Horror movies, ranked by adrenaline junkies worldwide. Anyone can vote on this CrowdRanked list, and can even add your own f...
#140 of 347 The Best Movies Based On Books 136.3k VOTES List of the best movies based off books, voted on by cine-bibliophiles everywhere. Many movies are based off of books but wh...
#173 of 710 The Best Movies Roger Ebert Gave Four Stars 160.2k VOTES List of movies Roger Ebert gave four stars, ranked best to eh. This is NOT a complete list of all of Roger Ebert's four star...
#101 of 808 The Greatest Chick Flicks Ever Made 413.8k VOTES Here's a list of the greatest chick flicks ever, ranked by fans and casual critics like you. The best girl movies are those ...
#3 of 58 Free Movies! The Best Films in the Public Domain 12.1k VOTES The best free movies in the public domain number among some of the best movies of all time, and since their copyrights have ...
#3 of 25 The Best Horror Films from the Silent Era 1k VOTES The early era of film gave birth to masterpieces that resonate even today. These silent horror films laid the groundwork for...
#11 of 14 Pretty Good Horror Movies That Take Place In Caves And Underground 1.3k VOTES Small spaces, complete darkness, and terrifying figures combine to make underground horror movies seriously frightening. The...
#10 of 20 The Best Movies Where the Guy Doesn't Get the Girl 13.4k VOTES WARNING! Potential spoilers on this list. We’ve been trained by Hollywood to expect that the guy will always get the girl...
#2 of 96 Early Technicolor Films 1.6k VOTES A list of early Technicolor Films, with pictures where possible. Color movies first appeared as early as 1903. Today, most f...
#19 of 52 The Best Gothic Horror Movies 6.1k VOTES Gothic horror (also commonly referred to as gothic fiction) is a genre of literature or film that typically combines horror,...
#18 of 214 The Best Universal Studios Movies List 11.4k VOTES List of Universal Studios movies, ranked best to worst, including trailers, genres, and release dates. Universal Studios pro...
#11 of 115 The Best Old Horror Movies 32.2k VOTES The best old horror movies include classic scary films designed to terrify. Early horror movies tapped into our deepest fear...
#11 of 38 The Best Golden Age of Horror Movies 2.3k VOTES The Golden Age of Hollywood began at the end of the silent era in American cinema in the later part of the 1920s and lasted ...
#41 of 209 The Best Classic Horror Movies 83.1k VOTES If you’re a true horror film enthusiast then you’ll recognize these famous directors and the movies that earned them worldwi...
#13 of 48 The Best 1920s Silent Movies 1k VOTES If not for the greatest silent movies of the '20s, we wouldn't have the same cinematic knowledge and techniques that we do...
Horror Movies Rob Zombie Has Awarded His Personal Stamp Of Approval 45.6k VIEWS It’s Friday night, you’re spending hours scrolling around looking for a scary movie to watch, but nothing is grabbing your a...
#4 of 200 The Best Movies of 1925 966 VOTES List of the best movies of 1925, with movie trailers when available. These top movies of 1925 are listed by popularity, so t...
The First Color Movies 14k VIEWS A list of the first color movies, with pictures where possible. Color movies first appeared as early as 1903. Today, most fi...

The Phantom of the Opera is also found on...