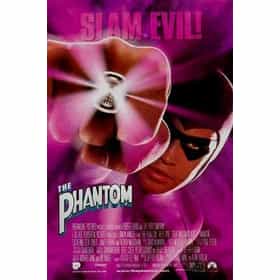 The Phantom is a 1996 American superhero film directed by Simon Wincer. Based on Lee Falk's comic strip The Phantom, the film stars Billy Zane as a seemingly immortal crimefighter and his battle against all forms of evil. The Phantom also stars Treat Williams, Kristy Swanson, Catherine Zeta-Jones, James Remar and Patrick McGoohan. The film was loosely inspired by three of The Phantom stories, "The Singh Brotherhood", "The Sky Band", and "The Belt"; but adds supernatural elements and several new characters. Sergio Leone expressed interest in developing The Phantom and intended to follow it with Mandrake the Magician. However, the project was never realized. ... more on Wikipedia

The Phantom is ranked on...

The Phantom is also found on...