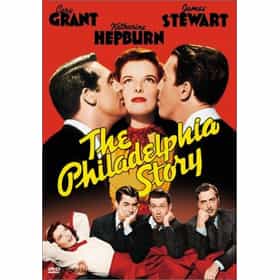 The Philadelphia Story is a 1940 American romantic comedy film directed by George Cukor, starring Cary Grant, Katharine Hepburn, and James Stewart and featuring Ruth Hussey. Based on the Broadway play of the same name by Philip Barry, the film is about a socialite whose wedding plans are complicated by the simultaneous arrival of her ex-husband and a tabloid magazine journalist. The socialite character of the playperformed by Hepburn in the filmwas inspired by Helen Hope Montgomery Scott, a Philadelphia socialite known for her hijinks, who married a friend of playwright Philip Barry. ... more on Wikipedia

The Philadelphia Story is ranked on...

#588 of 1,699 The Most Rewatchable Movies 3.3M VOTES There are some movies that I always stop at and watch if I see them on TV or I can put in the DVD player and watch when I'm ...
#431 of 6,114 The Best Movies of All Time 5.6M VOTES These are the best movies of all time, ranked by movie experts and film fans alike. What are the greatest movies of all time...
#380 of 1,204 The Absolute Funniest Movies Of All Time 1M VOTES The funniest movies of all time, ranked by fans. What are the funniest movies ever made? From Airplane! to The Jerk to The 4...
#24 of 46 Every Single Movie On Rotten Tomatoes With 100% Approval, Ranked 45.7k VOTES There are more 100% fresh movies on Rotten Tomatoes than you might think. Sure, some people think Rotten Tomatoes is bad and...
#453 of 992 The All-Time Greatest Comedy Films 415.6k VOTES The best comedy movies of all time are listed here, in one convenient list to be voted on and ranked by true fans. Thes...
#170 of 808 The Greatest Chick Flicks Ever Made 413.8k VOTES Here's a list of the greatest chick flicks ever, ranked by fans and casual critics like you. The best girl movies are those ...
#29 of 44 30+ Very Preppy Movies with the Preppiest Characters 1.2k VOTES We can't all live like the rich, but we can get a glimpse into the world of the preppy elite through great films. Very prepp...
#18 of 85 The Best Movies Based on Plays 3.1k VOTES There are tons of famous plays, and the glitz and glamour of attending the theatre is a truly unique experience. While few t...
#22 of 36 The Funniest Comedy Movies About Marriage 1.5k VOTES   From the wedding day to the silver anniversary, movie marriages are full of enough funny to last a lifetime. The to...
#40 of 75 The Greatest Classic Romance Movies 6.4k VOTES Who wouldn't swoon over a romantic tale of two people coming together against all odds to fall in love? These classic r...
#18 of 70 The Best Oscar-Nominated Movies of the 1940s 3k VOTES Picking the very best decade in Hollywood filmmaking is no easy task. But many film buffs will agree that the 1940s marked a...
#6 of 253 The Best Movies of 1940 3.7k VOTES List of the best movies of 1940, with movie trailers when available. These top movies of 1940 are listed by popularity, so...
#14 of 199 The Best Metro-Goldwyn-Mayer Movies List 4.4k VOTES List of Metro-Goldwyn-Mayer movies, ranked best to worst, including trailers, genres, and release dates. Metro-Goldwyn-Mayer...
#3 of 74 The Very Best Cary Grant Movies 17.7k VOTES List of the best Cary Grant movies, ranked best to worst with movie trailers when available. Cary Grant was one of the most ...
#4 of 113 The Best Screwball Comedies 6.7k VOTES A list of all the best screwball comedy movies ever made, many of which are streaming on Netflix and Amazon Prime. OK well m...
#3 of 61 The Best Comedies of the 1940s 2.1k VOTES The comedy films of the 1940s are a diverse group of films, running the gamut from social commentary, slapstick comedy, come...
#55 of 90 The Best Wedding Movies 96k VOTES A list of the best wedding movies. These are films that feature engagements and getting married as a central theme. If you b...
#1 of 33 The Best Romantic Comedies of the 1940s 530 VOTES In the 1940s, Hollywood produced stirring dramas and glittering musicals, but some of the most beloved films of that era are...
#14 of 48 The Best Romance Movies of the 1940s 1.2k VOTES With this list of 1940s romance movies ranked from best to worst, you can travel back to a bygone era of cinematic romance. ...
#7 of 85 Every James Stewart Movie, Ranked Best to Worst 15.1k VOTES The best James Stewart movies of all time prove that he was one of the top actors of his generation. Active from the 1930s u...
#39 of 66 The Best Movies All Aspiring Actors Must Watch 2.1k VOTES For actors, watching other people acting is a great way to learn. Anyone in the industry could easily list off the names of ...
#13 of 25 The Best Movies for Brides to Watch 351 VOTES If there's one thing all brides-to-be have in common, it's stress. However, try not to be too hard on all the Bridezill...
AFI's Top 100 Love Story Movies 18.6k VIEWS AFI's list of the best love story films of all-time. This romance movies list is sure to sweep you off your feet.

The Philadelphia Story is also found on...