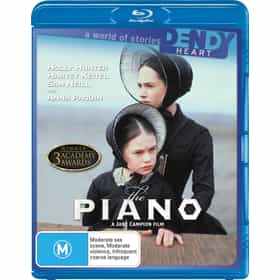 The Piano is a 1993 romantic drama film about a mute female piano player and her daughter. Set during the mid-19th century in a rainy, muddy frontier backwater on the west coast of New Zealand, it revolves around the piano player's passion for playing the piano and her efforts to regain her piano after it is sold. The Piano was written and directed by Jane Campion, and stars Holly Hunter, Harvey Keitel, Sam Neill, and Anna Paquin, in her first acting role. The film's score for the piano by Michael Nyman became a best-selling soundtrack album, and Hunter played her own piano pieces for the film. She also served as sign language teacher for Paquin, earning three screen credits. The film ... more on Wikipedia

The Piano is ranked on...

The Piano is also found on...