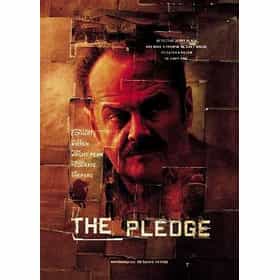 The Pledge is a 2001 American mystery film directed by Sean Penn. The film features an ensemble cast, starring Jack Nicholson, Aaron Eckhart, Helen Mirren, Robin Wright Penn, Vanessa Redgrave, Sam Shepard, Mickey Rourke, and Benicio del Toro. It is based on Friedrich Dürrenmatt's 1958 novella The Pledge: Requiem for the Detective Novel. Dürrenmatt wrote The Pledge to refine the theme he originally developed in the screenplay for the 1958 German film It Happened in Broad Daylight with Heinz Rühmann. ... more on Wikipedia

The Pledge is ranked on...

The Pledge is also found on...