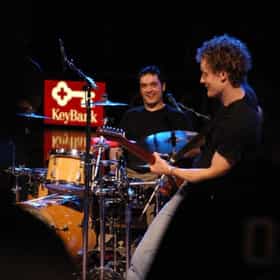 The Presidents of the United States of America

The Presidents of the United States of America (occasionally referred to as PUSA, The Presidents or Pot USA) was an American alternative rock power trio band. The band formed in Seattle, Washington, in 1993, and disbanded in 2016. The three-piece group consisted of vocalist and bassist Chris Ballew, drummer Jason Finn with guitarist Andrew McKeag. Guitarist Dave Dederer was a member of the band for eleven years before leaving in 2004. The band released six studio albums during its twenty-three-year existence, and were best-known for their 1996 song "Peaches". ... more on Wikipedia

The Presidents of the United States of America is ranked on...

#737 of 2,175 The Greatest Musical Artists of All Time 13.4M VOTES When VH1 polled fellow artists to name the greatest artists of all time, it seemed like a good idea---but in reality, the li...
#3 of 14 Rock Bands Who Created TV Theme Songs, Ranked Best To Worst 6.6k VOTES Believe it or not, some major rock bands have taken the plunge into the world of television - and we're not just talking abo...
#27 of 73 The Best Grunge Bands 52.2k VOTES The beginning of the 1990s saw a new genre of rock emerge: grunge music. Grunge bands emerged left and right, primarily from...
#130 of 288 The Best Hardcore Punk Bands 173.5k VOTES This hardcore punk bands list ranks the best hardcore bands and musicians by votes. This list of good hardcore punk bands ...
#36 of 53 The Best Rock Trios Of All Time 3.2k VOTES Rock fans, this list is for you. We’re ranking the best trios in rock music. Is it The Police - or are you more of a Nirvana...
#63 of 204 The Best Power Pop Bands/Artists 14.9k VOTES The genre known as power pop is a derivative of 1960s rock pop that ruled the airwaves. The best power pop bands have catchy...

The Presidents of the United States of America is also found on...