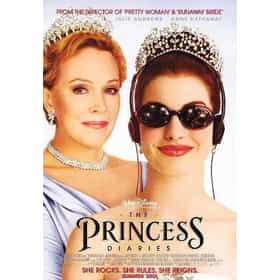 The Princess Diaries is a 2001 American comedy film produced by singer and actress Whitney Houston and directed by Garry Marshall. It is based on Meg Cabot's 2000 novel of the same name. The film stars acting newcomer Anne Hathaway as Mia Thermopolis, a teenager who discovers that she is the heir to the throne of the fictional Kingdom of Genovia, ruled by her grandmother Queen Dowager Clarisse Renaldi, as portrayed by actress and singer Julie Andrews. It also stars Heather Matarazzo as Mia's best friend Lilly Moscovitz, Héctor Elizondo as Joseph, the Queen's Head of Security, and Robert Schwartzman as Lilly's brother Michael, who has a crush on Mia. Released to North American ... more on Wikipedia

The Princess Diaries is ranked on...

The Princess Diaries is also found on...