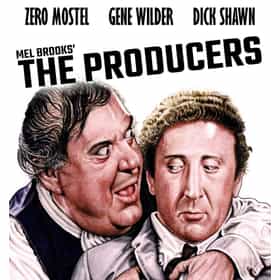 The Producers is a 1968 American satirical dark comedy film written and directed by Mel Brooks. The film is set in the late 1960s and it tells the story of a theatrical producer and an accountant who want to produce a sure-fire Broadway flop. They take more money from investors than they can repay and plan to abscond to Brazil as soon as the play closes, only to see the plan go awry when the show turns out to be a hit. The film stars Zero Mostel as Max Bialystock, the producer, and Gene Wilder as Leo Bloom, the accountant, and features Dick Shawn as L.S.D., the actor who ends up playing the lead in the musical within the movie, and Kenneth Mars as former Nazi soldier and playwright, ... more on Wikipedia

lists about The Producers

Every Song in The Producers, Ranked by Singability 161 votes Edgy, sardonic, and downright hilarious, musical theater nerds with an offbeat sense of humor certainly have opinions on the...

The Producers is ranked on...

The Producers is also found on...