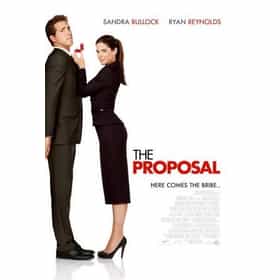 The Proposal is a 2009 American romantic comedy film set in Sitka, Alaska. Directed by Anne Fletcher and written by Peter Chiarelli, the film features Sandra Bullock and Ryan Reynolds in the leading roles, with Betty White, Mary Steenburgen, and Craig T. Nelson in supporting roles. The film was produced by Mandeville Films and released on June 19, 2009, in North America by Touchstone Pictures. The plot centers on a Canadian woman, Margaret Tate, who learns that she may face deportation charges because of her expired visa. Determined to retain her position as executive chief, Tate convinces her assistant, Andrew Paxton, to temporarily act as her fiancé. Initially planning on ... more on Wikipedia

The Proposal is ranked on...

The Proposal is also found on...