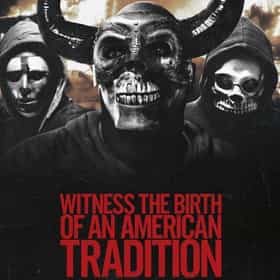 The First Purge is a 2018 American dystopian action horror film directed by Gerard McMurray, and the fourth installment in the series. To push the crime rate below one percent for the rest of the year, the New Founding Fathers of America (NFFA) test a sociological theory that vents aggression for one night in one isolated community, but when the violence of the oppressors meets the rage of the marginalized, the contagion will explode from the trial-city borders and spread across the nation. ... more on Wikipedia

The First Purge is ranked on...

#554 of 769 The Best Horror Movies of All Time 1M VOTES Horror movies, ranked by adrenaline junkies worldwide. Anyone can vote on this CrowdRanked list, and can even add your own f...
#54 of 69 25+ Great Movies That Have a Ticking Clock 1.7k VOTES Tick, tock, tick, tock – just the sound of a ticking clock generates anxiety, but when lives are on the line, it creates gre...
#16 of 19 The Most Underrated Sequels Of The 2010s, Ranked 538 VOTES In spite of evidence to the contrary, it is a generally accepted truism that sequels are always worse than the original. Sti...
#8 of 18 The Most Anticipated Horror Movies Of 2018 1.6k VOTES Fans of the genre are already marking their calendars in anticipation of horror movies coming out in 2018. As with every yea...
#84 of 127 The Best Horror Movies Of The 2010s, Ranked 32.4k VOTES These horror films from the 2010s have got the best scares, screams, and monsters of the decade. Jordan Peele came onto the ...
#23 of 162 The 100+ Best Action Movies for Horror Fans 1.1k VOTES Are you ready for some frightening action-packed movies? These scary action films are the best that the hybrid genre has to ...
#94 of 174 The Best Movies Of 2018 64.3k VOTES With so many highly anticipated films coming out, it's hard to decide on the best movies of 2018. From blockbusters to the s...
#531 of 586 The Best Fantasy Movies 902.8k VOTES A list of the best fantasy movies ever made. This fantasy film list can be sorted by cast, year, director and more. This lis...
#458 of 499 The Scariest Movies Ever Made 545.4k VOTES These are the all-time scariest movies ever made. Many of these movies have become part of the pop culture lexicon due to th...
#21 of 41 The Best Horror Movies Of 2018 36.4k VOTES If you're looking for a good scare, why not check out some of the best horror movies of 2018? Scary movies have the ability ...
#40 of 66 The Best Action Movies Of 2018 37.7k VOTES In 2018, action films have dominated the big screen. With their fast-paced storylines, invigorating fight sequences, and her...
#8 of 29 The Best Black Horror Movies 482 VOTES Some of the scariest movies feature talented casts of African American or black actors and actresses. The top black horror m...
#16 of 30 The Best Sequels of 2018 941 VOTES From Ant-Man and the Wasp to Super Troopers 2, some of 2018's best movies were sequels. Throughout Hollywood's history, movi...