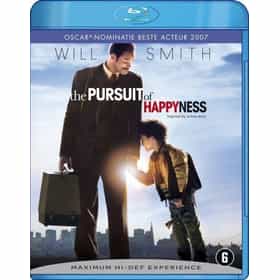 The Pursuit of Happyness is a 2006 American biographical drama film based on Chris Gardner's nearly one-year struggle with homelessness. Directed by Gabriele Muccino, the film features Will Smith as Gardner, an on-and-off-homeless salesman. Smith's son Jaden Smith co-stars, making his film debut as Gardner's son, Christopher Jr. Will Smith and Jaden Smith later appeared together in the film After Earth. The screenplay by Steven Conrad is based on the best-selling memoir written by Gardner with Quincy Troupe. The film was released on December 15, 2006, by Columbia Pictures. For his performance, Smith was nominated for an Academy Award and a Golden Globe for Best Actor. The unusual ... more on Wikipedia

lists about The Pursuit of Happyness

The Pursuit of Happyness is ranked on...

#41 of 157 The Best Movies You Never Want to Watch Again 156.2k VOTES A list of the most disturbing movies that, for whatever reason, you never, ever want to watch again. This list is full of gr...
#16 of 720 The Best Black Movies Ever Made, Ranked 664.4k VOTES The best black movies are favorites that explore African-American culture and themes. This list is ranked by film fans, many...
#105 of 307 The Best Movies for Men 13.1k VOTES The films on this list of the best movies for men have been ranked by the community as the best films guys will love. From e...
#18 of 199 The Biggest Tearjerker Movies of All Time 36.9k VOTES This is a CrowdRanked list of the saddest movies of all time: tearjerkers. Does just reading the names of these sad movies m...
#5 of 236 The Best Movies Based on True Stories 58.2k VOTES "Based on a true story" is so commonly thrown around it's practically the new "in a world where..." as f...
#29 of 151 The Most Utterly Depressing Movies Ever Made 41.9k VOTES These films are depressing, but they're also remarkable. After all, what's better than depressing movies when you need to si...
#7 of 28 28 Movies That Actually Taught Us Something 9.8k VOTES These movies didn't just entertain, they also taught us valuable lessons about life, the universe, and everything. This list...
#12 of 59 The Best Serious Movies Starring Comedians 11.2k VOTES Dramatic movies starring comedians, ranked by comedy and film fans. Often, after making a name for themselves appearing in w...
#7 of 33 The Best Movies for New Parents to Watch 5k VOTES Becoming a parent is the biggest decision you’ll probably ever make, and one of the most terrifying! What better way to ca...
#5 of 48 The Best Father-Son Movies Ever Made 2k VOTES For this list we're ranking the best movies for fathers and sons to watch together, ranked by your votes. The best father-so...
#10 of 41 The Greatest Movies About Making Money 9.4k VOTES Whether they are about gambling, business, or planning a good heist, making money movies have made millions for Hollywood. T...
#1 of 30 The Best Movies for Expecting Fathers to Watch 238 VOTES Becoming a parent is the biggest decision you’ll ever make, and can also be the scariest. Most expectant fathers worry they ...
#172 of 227 The Best Biography Movies 2.2k VOTES A list of all the best biography movies ever made, many of which are streaming on Netflix and Amazon Prime. This biopic movi...
#5 of 79 The Best Movies About Business 1.8k VOTES When it comes to the hustle and bustle of Wall Street, a good old rags to riches story, the fascination of private companies...
#18 of 49 The Best Black Drama Movies 2.3k VOTES There are several Academy Award winning movies on this impressive list of the greatest black drama films. Heavy-hitting tale...
#2 of 41 The Best Movies About Not Giving Up 1.8k VOTES There’s nothing more inspirational than hearing a story of a person surviving against all odds, holding on to hope with all ...
#14 of 31 The Best Movies About Money 510 VOTES Everybody dreams about living the lifestyle of the rich and the famous. What would it be like if you scored big in life and ...
#2 of 167 The Best Family Drama Movies of All Time 5.4k VOTES The best family drama movies represent a fun bonding experience for the entire family. What makes a good family drama? Typic...
#4 of 36 The Best Movies for Empaths to Watch 572 VOTES On occasion, you just need to watch a movie that hits you right in the feels. For sensitive people, there are plenty of grea...
#5 of 32 The Best Will Smith Movies 21.5k VOTES List of the best Will Smith movies, ranked best to worst with movie trailers when available. After becoming a household name...
21 Movies Where Real Family Members Play Fictional Families 211.2k VIEWS This list of movies that star real families is pretty impressive. Some of the best actors and actresses of all time have sta...
#24 of 104 The Best PG-13 Family Drama Movies 810 VOTES List of PG-13 family drama movies, ranked from best to worst with movie trailers when available. This list takes the best PG...
#3 of 28 The Best Thandie Newton Movies 510 VOTES List of the best Thandie Newton movies, ranked best to worst with movie trailers when available. Thandie Newton's highest gr...
Womansday's Top 10 Movies With Adorable Single Dads 3.7k VIEWS Woman's Day's list of the top single dad movies. Some of these may be teen chick flicks, but they do feature heartwarming ...

The Pursuit of Happyness is also found on...