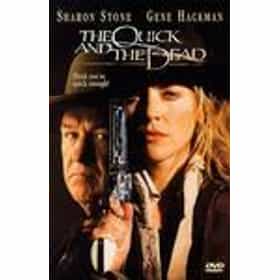 The Quick and the Dead

This film is a 1995 western film directed by Sam Raimi and starring Sharon Stone, Gene Hackman, Russell Crowe and Leonardo DiCaprio. The story focuses on "The Lady", a gunfighter who rides into the frontier town of Redemption, controlled by John Herod. The Lady joins a dueling competition in an attempt to exact revenge for her father's life. Simon Moore's script was purchased by Sony Pictures Entertainment in May 1993, and actress Sharon Stone signed on as both star and co-producer. Development was fast tracked after director Sam Raimi's hiring, and principal photography began in Old Tucson Studios in Arizona on November 21, 1993. ... more on Wikipedia

The Quick and the Dead is ranked on...

The Quick and the Dead is also found on...