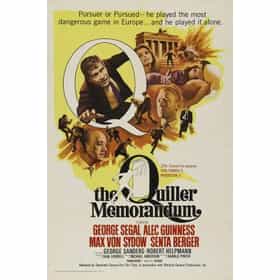 The Quiller Memorandum is an Anglo-American Eurospy film adapted from the 1965 spy novel The Berlin Memorandum, by Elleston Trevor under the name "Adam Hall", screenplay by Harold Pinter, directed by Michael Anderson, featuring George Segal, Alec Guinness, Max von Sydow and Senta Berger. The film was shot on location in West Berlin and in Pinewood Studios, England. It was nominated for 3 BAFTA Awards, while Pinter was nominated for an Edgar Award for the script. The film is a spy-thriller set in 1960s Cold War-era West Berlin, where agent Quiller is sent to investigate a neo-Nazi organisation. The film had its World Premiere on 10 November 1966 at the Odeon Leicester Square ... more on Wikipedia

The Quiller Memorandum is ranked on...

The Quiller Memorandum is also found on...