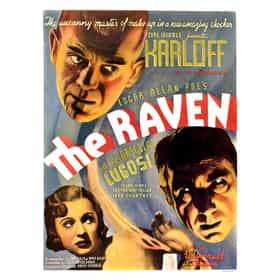 The Raven is a 1935 American horror film directed by Lew Landers and starring Boris Karloff and Béla Lugosi. The picture revolves around Edgar Allan Poe's famous homonymous poem, featuring Lugosi as a Poe-obsessed mad surgeon with a torture chamber in his basement and Karloff as a fugitive murderer desperately on the run from the police. Lugosi had the lead role, but Karloff received top billing, using only his last name. Almost three decades later, Karloff also appeared in another film with the same title, Roger Corman's 1963 comedy The Raven with Vincent Price, Peter Lorre and Jack Nicholson. Aside from the title and references to the poem, the two films bear no resemblance to ... more on Wikipedia