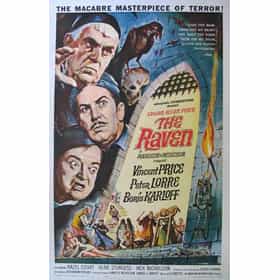 The Raven is a 1963 American independent B movie/horror-comedy film produced and directed by Roger Corman. The film stars Vincent Price, Peter Lorre, and Boris Karloff as a trio of rival sorcerers. It was the fifth in the so-called Corman-Poe cycle of eight films largely featuring adaptations of Edgar Allan Poe stories produced by Roger Corman and released by AIP. The film was written by Richard Matheson, based on references to Poe's poem "The Raven". The supporting cast includes a young Jack Nicholson. Three decades earlier, Karloff had appeared in another film with the same title, Lew Landers' 1935 horror film The Raven with Bela Lugosi. ... more on Wikipedia

The Raven is also found on...