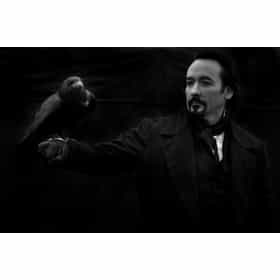 The Raven is a 2012 American mystery thriller film directed by James McTeigue and based on a screenplay by Ben Livingston and Hannah Shakespeare. It stars John Cusack, Alice Eve, Brendan Gleeson and Luke Evans. It was released March 9, 2012 in Canada, Ireland, the United Kingdom and the United States on April 27, 2012. Set in 1849, it is a fictionalized account of the last days of Edgar Allan Poe's life, in which the poet and author pursues a serial killer whose murders mirror those in Poe's stories. While the plot of the film is fictional, the writers based it on some accounts of real situations surrounding Edgar Allan Poe's mysterious death. Poe is said to have repeatedly called out ... more on Wikipedia

The Raven is also found on...