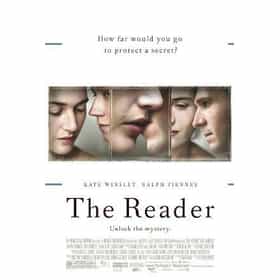 The Reader is a 2008 German-American romantic drama film based on the 1995 German novel of the same name by Bernhard Schlink. The film was written by David Hare and directed by Stephen Daldry. Ralph Fiennes and Kate Winslet star along with the young actor David Kross. It was the last film for producers Anthony Minghella and Sydney Pollack. Production began in Germany in September 2007, and the film opened in limited release on December 10, 2008. It tells the story of Michael Berg, a German lawyer who as a mid-teenager in 1958 had an affair with an older woman, Hanna Schmitz, who then disappeared only to resurface years later. ... more on Wikipedia

The Reader is ranked on...

#162 of 672 The Most Overrated Movies of All Time 734.1k VOTES The most overrated movies of all time in one list, ranked in order of how overrated they really are. Being overrated doesn't...
#147 of 221 The Greatest World War II Movies of All Time 367.8k VOTES The best World War 2 movies remind us that perhaps no single event has had a greater impact on the future of filmmaking than...
#39 of 66 The Best Movies About Getting Dumped 2.1k VOTES There are a lot of ways different people handle getting dumped. Some put on sweatpants and reach for a pint (or 12) of Che...
#54 of 55 The Best Oscar-Nominated Movies of the 2000s 1.8k VOTES From the glittering cabarets of Belle Epoque France to the windswept plains of Middle Earth, the best movies of the 2000s tr...
#12 of 35 Great Movies About Secret Love Affairs 2.9k VOTES There is nothing quite as tantalizing as seeing a secret love affair dramatized on the big screen. The top love affair movie...
#34 of 47 The Biggest Oscar Bait Films of All Time 6.4k VOTES There are a number of ways in which a film could be classified as "Oscar bait," and not all Oscar bait movies are ...
#64 of 202 The Best Romance Movies Rated R 15k VOTES   List of R-Rated romance movies, ranked from best to worst with movie trailers when available. This list takes the b...
#27 of 38 The Best Steamy Romance Movies, Ranked 2.2k VOTES Steamy romance movies can be a guilty pleasure in the form of a poorly plotted but erotically charged cinematic experience. ...
#21 of 125 The Best Movies About Tragedies 7.7k VOTES A list of all the best tragedy movies ever made, many of which are streaming on Netflix and Amazon Prime. To see a more gene...
#3 of 41 The Best Kate Winslet Movies 6.2k VOTES This list of the best Kate Winslet movies is ranked best to worst and includes movie trailers when available. Everyone loved...
#6 of 46 The Best Ralph Fiennes Movies 1.7k VOTES List of the best Ralph Fiennes movies, ranked best to worst with movie trailers when available. Ralph Fiennes's highest gros...
#4 of 45 The Best Mainstream Movies That Flash a Lil Male Nudity 1.7k VOTES A list of the best male nudity movies ever made, ranked by movie fans with film trailers when available. This male nudity mo...

The Reader is also found on...