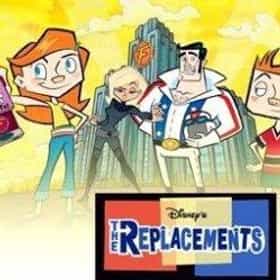 The Replacements is an American action-fantasy-comedy animated television series for Disney Channel that ran originally from July 28, 2006 to March 30, 2009. Although the series originally aired episodes on Saturdays at 8:00pm EST, it was moved to Mondays at 5:00pm EST. The show aired for the last time on August 27, 2011 after the ABC Kids block being canceled. In Canada, Disney XD currently airs the series on weekday afternoons. It is noted for its roster of celebrity guest stars, including High School Musical star Zac Efron, Cory in the House star Jason Dolley, Harry Potter star Bonnie Wright, Hannah Montana star Miley Cyrus and Sonny With a Chance star Doug Brochu, as well as Ed ... more on Wikipedia

The Replacements is ranked on...

The Replacements is also found on...