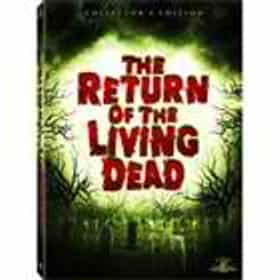 This film is a 1985 American black comedy/zombie horror film written and directed by Dan O'Bannon and starring Clu Gulager, James Karen, Don Calfa and Linnea Quigley. The film tells the story of how three men accompanied by a group of teenage punks deal with the accidental release of a horde of brain hungry zombies onto an unsuspecting town. The film is known for introducing the popular concept of zombies eating brains, as opposed to just eating human flesh, like previous zombie iterations, as well as its soundtrack, which features several noted deathrock and punk rock bands of the era. ... more on Wikipedia

The Return of the Living Dead is ranked on...

The Return of the Living Dead is also found on...