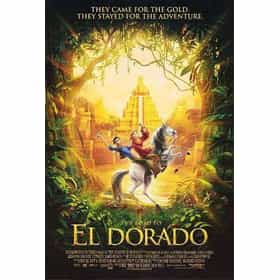 The Road to El Dorado

The Road to El Dorado is a 2000 American animated musical adventure comedy film directed by Eric "Bibo" Bergeron and Don Paul, with additional sequences by Will Finn and David Silverman, starring Kevin Kline, Kenneth Branagh, and Rosie Pérez, and produced by DreamWorks. The soundtrack features songs by Elton John and Tim Rice, as well as composer Hans Zimmer. The movie begins in 16th-century Seville, Spain, and tells about two men named Tulio and Miguel. During a dice game where they have been using loaded dice, they win a map that supposedly shows the location of El Dorado, the legendary city of gold in the New World. ... more on Wikipedia

The Road to El Dorado is ranked on...

The Road to El Dorado is also found on...