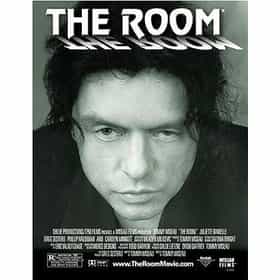 The Room is a 2003 independent romantic drama film written, directed, produced by, and starring Tommy Wiseau. The film is primarily centered on the melodramatic love triangle between an amiable banker, his fiancée, and his conflicted best friend. A significant portion of the film is dedicated to a series of unrelated and unresolved subplots involving the friends and family of the main characters. Entertainment Weekly has called The Room "the Citizen Kane of bad movies" and a number of notable publications have labeled it as one of the worst films ever made. Originally shown only in a limited number of California theaters, the film quickly developed a cult following as ... more on Wikipedia

lists about The Room

Outrageous Behind The Scenes Stories From "The Room" 540 votes Tommy Wiseau's The Room is an enigma. It's not just a bad film - it's a film so inexplicably terrible that the realm of its ...
Oh, Hi, Mark: Here Are The Funniest Quotes From 'The Room' 117 votes Here are the (unintentionally) funniest quotes from The Room. While Tommy Wiseau intended his film to be a romantic drama, t...
Someone Mashed Up Deadpool With Tommy Wiseau From The Room's Voice, And It's Oddly Perfect 2.6k views Might ruin Deadpool for you, but it's probably worth it

The Room is ranked on...

The Room is also found on...