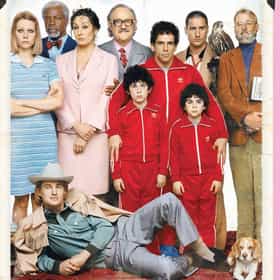 The Royal Tenenbaums is a 2001 American comedy-drama film directed by Wes Anderson and co-written with Owen Wilson. The film stars Gene Hackman, Anjelica Huston, Bill Murray, Gwyneth Paltrow, Ben Stiller, Luke Wilson, Owen Wilson and Danny Glover. It follows the lives of three gifted siblings who experience great success in youth, and even greater disappointment and failure after their eccentric father leaves them in their adolescent years. An ironic and absurdist sense of humor pervades the film. Hackman won a Golden Globe for his performance. The screenplay was nominated for an Academy Award. In 2008, a poll taken by Empire ranked it as the 159th greatest film ever made. ... more on Wikipedia

The Royal Tenenbaums is ranked on...

The Royal Tenenbaums is also found on...