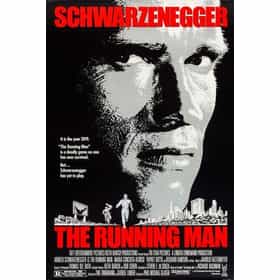 The Running Man is a 1987 American science fiction action film loosely based on the 1982 novel The Running Man, written by Stephen King and published under the pseudonym Richard Bachman. Directed by Paul Michael Glaser, the film stars Arnold Schwarzenegger, María Conchita Alonso, Jesse Ventura, Jim Brown, and Richard Dawson. Director Andrew Davis was fired one week into filming and replaced by Glaser. Schwarzenegger has stated this was a "terrible decision" as Glaser "shot the movie like it was a television show, losing all the deeper themes." Schwarzenegger believes this hurt the movie. ... more on Wikipedia

The Running Man is ranked on...

The Running Man is also found on...