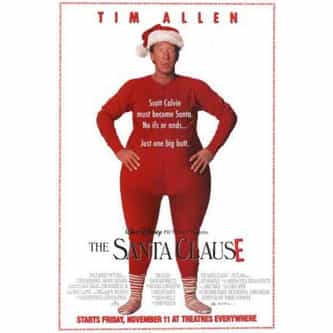 Tagline
This Christmas
the snow hits the fan.

The Santa Clause is a 1994 American fantasy family comedy film directed by John Pasquin. It is the first installment in The Santa Clause trilogy and it stars Tim Allen as Scott Calvin, an ordinary man who accidentally causes Santa Claus to fall from his roof on Christmas Eve. When he and his young son, Charlie, finish St. Nick's trip and deliveries, they go to the North Pole where Scott learns that he must become the new Santa and convince those he loves that he is indeed Father Christmas. ... more on Wikipedia

The Santa Clause IS LISTED ON