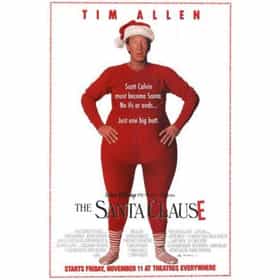 The Santa Clause is a 1994 American fantasy family comedy film directed by John Pasquin. It is the first installment in The Santa Clause trilogy and it stars Tim Allen as Scott Calvin, an ordinary man who accidentally causes Santa Claus to fall from his roof on Christmas Eve. When he and his young son, Charlie, finish St. Nick's trip and deliveries, they go to the North Pole where Scott learns that he must become the new Santa and convince those he loves that he is indeed Father Christmas. This was Pasquin and Allen's first movie collaboration after they both worked together on the TV series Home Improvement. Pasquin and Allen would later work again on the films Jungle 2 Jungle and Joe ... more on Wikipedia

The Santa Clause is ranked on...

#711 of 1,699 The Most Rewatchable Movies 3.5M VOTES There are some movies that I always stop at and watch if I see them on TV or I can put in the DVD player and watch when I'm ...
#58 of 493 The Funniest '90s Movies 305.6k VOTES List of the funniest 90s movies. The best comedies of the 1990s make up the titles on this ranking page. Nineties nostalgia ...
#82 of 186 The Best Movies for Tweens 103.9k VOTES Raising a tweenager can be a handful. It's a very awkward age all around and they can be hard to find good, family-friendly ...
#66 of 257 The Best Movies for 10-Year-Old Kids 101.7k VOTES The films on this list of the best movies for 10 year olds have been ranked by the community as the best films for this age ...
#22 of 136 The Best Movies of 1994 17.8k VOTES A list of the best movies of 1994, from instant classics like Pulp Fiction to hilarious PG-13 Comedies like Dumb and D...
#9 of 109 The Best Christmas Movies of All Time 417.9k VOTES One of the most telling signs that the holiday season is upon us is when classic Christmas movies begin to flood our TV scre...
#14 of 143 The Best Disney Live-Action Movies 124.1k VOTES What are the best Disney live action movies? While Disney has put out some of the most incredible, memorable animated featur...
#9 of 14 Movies From Your Childhood That Taught You Bad Lessons 12.1k VOTES Kids' movies are typically supposed to promote wholesome values. Perhaps more importantly, movies are also supposed to ...
#4 of 12 Beloved Family Classics That Are Chock-Full Of Tragedy 4.9k VOTES There's nothing quite like a good, wholesome family movie to help you unwind after a long day. Luckily, Holly...
#9 of 15 Deleted Scenes That Would’ve Totally Changed A Movie's Main Character 2k VOTES Plenty goes into the making of a movie, especially if it's a blockbuster. While we like to believe our favorite films are th...
#41 of 200 The Very Best Children's Movies 70.7k VOTES Kid's movies list--all of the best films for children that were ever made, including classics like E.T. and more recent kid'...
#110 of 380 The Greatest Romantic Comedies of All Time 195.8k VOTES Romantic comedy is one of the oldest and most popular film genres of all time. The term "romantic comedy" can refe...
#24 of 201 The Best PG Fantasy Movies 23.3k VOTES List of PG fantasy movies, ranked from best to worst with movie trailers when available. This list takes the best PG fantasy...
#11 of 81 The Best Winter Movies 7.1k VOTES Some of our favorite memories take place in winter. From the first winter holidays, to the first snow fall of the year, and ...
#10 of 20 20 Memorable Christmas Dinner Scenes 390 VOTES Sitting down for a big yuletide meal is an annual ritual for millions of families. The best Christmas dinner scenes in ...
#7 of 32 The Best PG Christmas Movies 2.7k VOTES Here are the best PG Christmas movies, ranked from best to worst with movie trailers when available. This list takes th...
#2 of 30 The Best '90s Christmas Movies 9.9k VOTES The best '90s Christmas movies are super diverse and unique. Some of them are gritty and adventurous, while others are ...
#2 of 23 The Best Fat Movies 1k VOTES A list of the best movies about fat people. This is a list of films that feature an actor or actress in a fat suit. If ...
#6 of 51 The Greatest Guilty Pleasure Family Movies 12k VOTES Is there anything quite as delightfully nostalgic as revisiting your favorite guilty pleasure family movies? While these mov...
#4 of 34 The Punniest Movie Titles in Film History 3.2k VOTES A pun is defined as "a joke exploiting the different possible meanings of a word or the fact that there are words that ...
#3 of 49 The Best Wendy Crewson Movies 406 VOTES List of the best Wendy Crewson movies, ranked best to worst with movie trailers when available. Wendy Crewson's highest gros...

The Santa Clause is also found on...