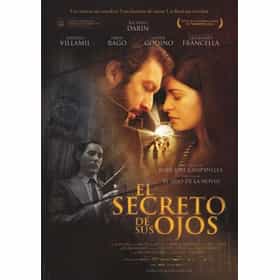 The Secret in Their Eyes

The Secret in Their Eyes is a 2009 Argentine crime thriller film directed, produced and edited by Juan José Campanella and written by Eduardo Sacheri and Campanella, based on Sacheri's novel La pregunta de sus ojos. The film, a joint production of Argentine and Spanish companies, stars Ricardo Darín and Soledad Villamil. The story unearths the buried romance between a retired judiciary employee and a judge who worked together a quarter century ago. They recount their efforts on an unsolved 1974 rape and murder that is an obsession not only for them, but for the victim's husband and the killer. The double setting frames the period of Argentina's Dirty War, a violent time ... more on Wikipedia

The Secret in Their Eyes is ranked on...

#482 of 551 The Best Movies of the 2000s 72.6k VOTES List of the best films released between the years 2000 and 2009, the era frequently referred to as the '00s or the "aug...
#58 of 139 The Greatest Movies in World Cinema History 6.4k VOTES Hollywood may be the epicenter of the movie business, but many of the best films released each year hail from all over the w...
#14 of 70 The Best Oscar-Winning Foreign Language Films 5.1k VOTES   Since the 20th Academy Awards ceremony in 1947, the Oscar for Best Foreign Language Film has been awarded. From 194...
#27 of 92 The Best New Thriller Movies of the Last Few Years 3k VOTES It's time to vote on the best new thriller films. Audiences have long enjoyed the pleasure of going to a movie for suspense ...
#52 of 73 The Best New Crime Movies of the Last Few Years 675 VOTES Current crime movies come in multiple forms. Many are dramas, but a few have a more comedic twist. Some offer&nbsp...
#5 of 50 The Best Foreign Thriller Movies, Ranked 1.4k VOTES If you love a good adrenaline rush, check out some of these superb foreign thriller movies to get your heart rate pumpi...
#1 of 30 The Best Suspense Movies on Netflix 5.3k VOTES If watching horror movies gives you the heebie jeebies, but action movies always seem too predictable, these suspense movies...

The Secret in Their Eyes is also found on...