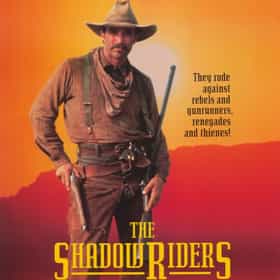 The Shadow Riders is a 1982 American Western television film directed by Andrew V. McLaglen and starring Tom Selleck, Sam Elliott, Dominique Dunne, and Katharine Ross. Based on the novel of the same name by Louis L'Amour, the film is about two brothers who meet up after fighting on opposite sides of the Civil War and return home only to find their siblings kidnapped by ruthless raiders. Together they set out on an adventure to rescue their family. The film reunites actors Selleck, Elliot, and Jeff Osterhage, who also starred in the 1979 film The Sacketts. The Shadow Riders first aired in the United States on September 28, 1982. ... more on Wikipedia

The Shadow Riders is ranked on...

The Shadow Riders is also found on...