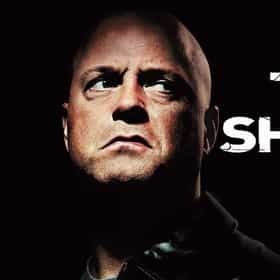 The Shield is an American drama television series starring Michael Chiklis that premiered on March 12, 2002, on FX, in the United States, and concluded on November 25, 2008, after seven seasons. Known for its portrayal of bad police officers, it was originally advertised as Rampart in reference to the true life Rampart Division police scandal, on which the show's Strike Team was loosely based. The series was created by Shawn Ryan and The Barn Productions for Fox Television Studios and Sony Pictures Television. ... more on Wikipedia

lists about The Shield

The Shield is ranked on...

#199 of 802 The Best TV Shows To Binge Watch 1.2M VOTES Bored? Not anymore! These are the best TV shows for binge-watching. The greatest television shows in the world are ranked he...
#472 of 590 The Best TV Theme Songs of All Time 323.2k VOTES The best TV theme songs and TV intros of all time will take you back to some of the greatest moments in TV. Television theme...
#47 of 158 Shows with the Best Freakin' Series Finales of All Time 264.6k VOTES This list of the best series finales in television is a somber reminder that no matter how much you love a TV character or a...
#77 of 135 The Best of Premium Cable TV Series 190.7k VOTES Best cable series on premium cable includes some of the greatest TV shows in history. This list of premium cable original pr...
#90 of 383 People who voted for The Shield... Men are 2x more likely to vote for this also upvote The Godfather Franchise on The Best Movies of All Time The Best TV Shows of The Last 20 Years 1.5M VOTES This best TV show list represents the combined opinions of thousands of TV fans. Anyone can vote on this list of the best TV...
#169 of 176 The Most Overrated Wrestlers of All Time 189.1k VOTES Who are the most overrated wrestlers of all time? Obviously any list that includes words like "overrated" and &quo...
#100 of 216 The TV Shows with the Best Writing 68.8k VOTES What are the best written TV shows of all time? The Writers Guild of America (WGA) and TV Guide recently compiled its list o...
#46 of 263 The Greatest TV Dramas of All Time 166.9k VOTES The greatest TV dramas of all time are the ones that make you feel connected to characters you will never meet in real life ...
#9 of 61 The Best FX Original Shows 10k VOTES The FX TV Network (which originally stood for "Fox Extended") is a paid cable and satellite TV station that has pr...
#44 of 51 What to Watch If You Love 'Ray Donovan' 232 VOTES Wondering what to watch after Ray Donovan? If seasons of intense drama about fixing the crimes of powerful people in this se...
#46 of 132 The Best TV Shows On Amazon Prime 39.1k VOTES The best streaming Amazon Prime TV shows and television series feature many of the most memorable TV characters of all time ...
#63 of 134 The Best TV Crime Dramas 35.9k VOTES The very best crime fiction shows on television, ranked from best to worst. This is a list of the greatest crime fiction sho...
#94 of 476 The Best Television Shows of the 2000s 148k VOTES Some great TV shows came out of the 2000s, while some have even lived on. Here's a list of the best shows that aired from 20...
#18 of 49 The Best Procedural Dramas of All Time 725 VOTES Procedural dramas can get your adrenaline pumping and keep you hooked from the get go, but which procedural dramas are the b...
#87 of 282 The Best Hulu TV Shows 8.2k VOTES The absolute best shows streaming on Hulu, ranked from the most popular to the least by the Ranker community. This list has ...
#34 of 110 The Best TV Shows Set In L.A. 2.1k VOTES Los Angeles, California is not only where most television series are filmed, but it also tends to be where they're set as we...
#46 of 59 The Most Exciting Thriller Series Ever Made 462 VOTES The best thriller TV shows ever aired are some of the most exciting and... well, thrilling series to watch on television, bu...
#11 of 52 The Best Serial Drama TV Shows 1.5k VOTES It's no secret America loves drama. Which shows that include over-the-top scenarios and intense characters are the best of t...
#20 of 27 The Best Procedural Dramas of the 2000s 478 VOTES Do Castle or NCIS top your list of the best procedural dramas of the 2000s? They do for many fans! The 2000s were a boon for...