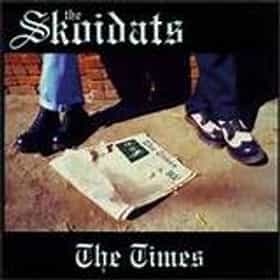 The Skoidats were a band that played music combining elements of ska, Oi!, jazz, and punk rock. They had a contemporary sound rooted in the 1960s ska traditions of Baba Brooks, the Ethiopians and the Skatalites. Unlike some ska-related bands, the Skoidats' sound varied greatly from song to song. The Skoidats formed in the summer of 1995 in Helena, Montana, and soon after their inception, they relocated to Missoula, Montana, losing two members. After arriving in Missoula, the two remaining original members recruited a drummer, two members of the University of Montana marching band, and a third horn player who had relocated from the Helena area. The band toured the country four times, ... more on Wikipedia

The Skoidats is ranked on...

#4 of 38 The Best Musical Artists From Montana 272 VOTES Here are the best artists and bands from Montana. The Northwest state has a long and storied history in the music indus...
#63 of 84 The Best Ska Punk Bands of All Time 30.2k VOTES Combining elements of ska music and hardcore punk rock, ska punk first became popular in the late 1970s and was started in t...