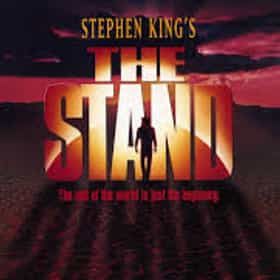 The Stand is a 1994 American television miniseries based on the novel of the same name by Stephen King. King also wrote the teleplay, and has a cameo role in the series. It was directed by Mick Garris and stars Gary Sinise, Miguel Ferrer, Rob Lowe, Ossie Davis, Ruby Dee, Jamey Sheridan, Laura San Giacomo, Molly Ringwald, Corin Nemec, Adam Storke, Ray Walston and Matt Frewer. It originally aired on ABC starting on May 8, 1994. ... more on Wikipedia

lists about The Stand

‘The Stand’ Mini-Series Is A Lot Cheesier Than We Remember 11.4k views In 1994, ABC unleashed an epic four-part mini-series on the viewing public. At the height of Stephen King mania, The Stand p...
The Best Characters From The Stand Miniseries 399 votes In 1994, ABC brought Stephen King’s horror novel The Stand to the small screen in the form of a four-episode miniseries. The...

The Stand is ranked on...

The Stand is also found on...