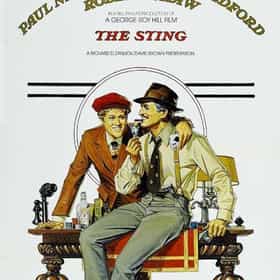 The Sting is a 1973 American caper film set in September 1936, involving a complicated plot by two professional grifters to con a mob boss. The film was directed by George Roy Hill, who had directed Newman and Redford in the western Butch Cassidy and the Sundance Kid. Created by screenwriter David S. Ward, the story was inspired by real-life cons done by brothers Fred and Charley Gondorff and documented by David Maurer in his book The Big Con: The Story of the Confidence Man. The title phrase refers to the moment when a con artist finishes the "play" and takes the mark's money. ... more on Wikipedia

lists about The Sting

The Sting Movie Quotes 88 votes Best The Sting quotes, with movie clips, ranked by fans. This list of great movie quotes from The Sting collects all of the ...

The Sting is ranked on...

The Sting is also found on...