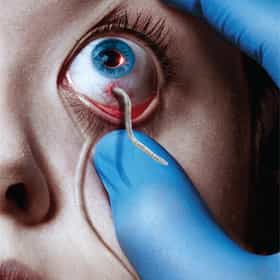 The Strain is an American horror drama television series that premiered on FX on July 13, 2014. It was created by Guillermo del Toro and Chuck Hogan, based on their novel trilogy of the same name. Carlton Cuse serves as executive producer and showrunner. Del Toro and Hogan wrote the pilot episode, "Night Zero", which del Toro directed. A thirteen-episode first season was ordered on November 19, 2013. The pilot episode premiered at the ATX Television Festival in Austin, Texas, in early June 2014. On August 6, 2014, FX renewed The Strain for a 13-episode second season to premiere in summer 2015. ... more on Wikipedia

The Strain is ranked on...

#330 of 802 The Best TV Shows To Binge Watch 1.2M VOTES Bored? Not anymore! These are the best TV shows for binge-watching. The greatest television shows in the world are ranked he...
#438 of 2,297 The Greatest TV Shows Of All Time 1.5M VOTES Choosing the best TV shows of all time means taking into account the best TV dramas, the best TV comedies, the best cartoons...
#200 of 290 The Most Overrated TV Shows Of All Time 550.7k VOTES List of the most overrated TV shows of all time, ranked by fans, critics, and people like you. Ever since the dawn of the ...
#173 of 258 The Best TV Shows Streaming On Hulu 38.4k VOTES The absolute best shows streaming on Hulu, ranked from the most popular to the least by the Ranker community. This list has ...
#27 of 61 The Best FX Original Shows 10k VOTES The FX TV Network (which originally stood for "Fox Extended") is a paid cable and satellite TV station that has pr...
#21 of 70 The Creepiest Shows In TV History 51.2k VOTES Television loves to push the boundaries of what can be shown to a general audience. The medium has evolved from being a pl...
#19 of 25 Shows & Movies to Watch If You Love "The Walking Dead" 3.4k VOTES The Walking Dead is a phenomenon, and it's not hard to see why. Between the bloody action, complex characters, and apoc...
#43 of 73 Shows That May Be Just Too Scary For TV 31.1k VOTES The scariest TV shows manage to provide major frights with excellent drama. Unlike these excellent paranormal reality TV sho...
#16 of 56 The Best Vampire TV Shows of All Time, Ranked 18.7k VOTES These are the best vampire TV shows of all time, according to fans of the supernatural and undead. Everyone loves these unde...
#3 of 41 What to Watch If You Love 'Z Nation' 120 VOTES Z Nation kept viewers on the edge of their seats as survivors searched for a cure to the zombie apocalypse, so it's no surpr...
#5 of 15 15 Greatest Scores By Game Of Thrones Composer Ramin Djawadi 1k VOTES Known for scoring Game of Thrones's main title theme, composer Ramin Djawadi remains one of the best modern compos...
#31 of 41 The Best Supernatural Thriller Series 9.1k VOTES Among our favorite genres are sub-genres that sometimes feel like they were designed specifically for us. In the case of thr...
#20 of 113 The Best Horror TV Shows 26.5k VOTES The very best horror shows on television, ranked from best to worst. This list of the greatest horror shows also includes pi...
#29 of 42 The Greatest Shows & Movies About Vampires 3.5k VOTES Throughout all of horror—whether it be film, TV, or literature—there are no other monsters who quite compare to vampires. Th...
#54 of 75 The Most Exciting Sci-Fi Series Ever Made 3.2k VOTES The top sci-fi TV shows ever aired are some of the most exciting and thought-provoking to watch on television, but which is ...
#14 of 47 The Best Thriller Horror Series 454 VOTES The best thriller horror shows pair the spooky pair ultimate frights with out-of-this-world tension. The best thriller horro...
#23 of 53 The Most Exciting Horror Series Ever Made 1.9k VOTES The best horror TV shows ever aired are some of the most harrowing series to watch on television, but which are the most exc...
#4 of 33 The Best TV Shows About Disease Outbreaks 360 VOTES The best shows about disease outbreaks can be both escapist fantasy or become painfully relevant. Some people prefer to watc...
#20 of 40 The Best FX On Hulu Shows 133 VOTES Hulu has had an FX channel for a while, but FX on Hulu is more than that. Launched in March 2020, FX on Hulu not only has pa...