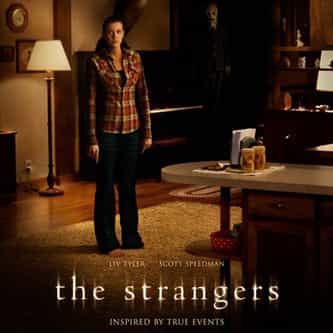 Tagline
Because you were home.
Inspired By Real Events
Lock the door. Pretend you're safe.
What are you afraid of?
What would you do if this was happening to you?
We tell ourselves there's nothing to fear - but sometimes
we're wrong.

The Strangers is a 2008 American horror film written and directed by Bryan Bertino and starring Liv Tyler and Scott Speedman as a young couple who are terrorized by three masked assailants, who break into the remote summer home and destroy all means of escape or calling for help by destroying their car, cell phones, and phone line. Produced on a budget of $9 million and after two postponements, the film was released theatrically in North America on May 30, 2008. It grossed $82.3 million at ... more on Wikipedia

The Hills Have Eyes

The Strangers IS LISTED ON