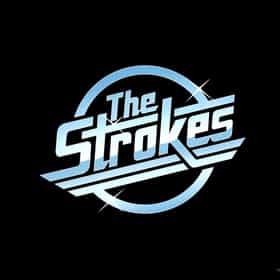 The Strokes are an American rock band formed in New York City in 1998, consisting of Julian Casablancas, Nick Valensi, Albert Hammond, Jr., Nikolai Fraiture and Fabrizio Moretti. Upon the release of their debut album Is This It in 2001, the group met wide critical acclaim. Since then, the band has maintained a fan base in New York City and elsewhere in the United States, the United Kingdom, Argentina, Ireland, Canada, France, Brazil and Australia. A number of members have embarked on a variety of side projects, though they regrouped for a fifth album, titled Comedown Machine, released on March 26, 2013. They have sold over 5 million albums. They are one of the many indie rock bands to ... more on Wikipedia

lists about The Strokes

The Strokes is ranked on...

#40 of 76 The Greatest Rock Band Logos of All Time 52.3k VOTES Picking the best band logos of all time turned out to be quite a task. When asking people about their favorite band logos, m...
#5 of 42 The Best Bands Like The Killers 467 VOTES Looking for more bands like The Killers? Fronted by lead vocalist Brandon Flowers, The Killers have been a rock staple since...
#75 of 88 Acts You'd Like To See As The Super Bowl Half Time Show 23.7k VOTES Musical acts Maroon 5, Travis Scott, and Big Bio are the most recent performers to agree to tackle the Super Bowl halftime s...
#17 of 71 The Best Live Bands of 2011 3k VOTES The best live bands of 2011 include mainstream rock icons like U2 and Foo Fighters, indie and Americana darlings like The Av...
#177 of 295 The Best Ever Garage Rock Bands 19.3k VOTES Rock music, at its purest, rawest form is exciting, dangerous and energetic. That's why garage rock and garage rock bands re...
#5 of 81 The Best Post-punk Revival Bands 13k VOTES At the end of the 1990s and early 2000s after alternative music ran its course (or at minimum wasn't nearly as popular), the...
#16 of 178 The Best Modern Rock Bands/Artists 32.6k VOTES Modern rock artists list, with photos, ranked best to worst by votes. List of good modern rock bands includes a filter so yo...
Every Band & Musician Who Has Performed on Saturday Night Live 109.8k VIEWS Live from the main stage at 30 Rockefeller Plaza, this is a list of every band, musician, and singer who has performed on Sa...
#114 of 147 The Best Musicians Who Performed on SNL In The 2010s 1.7k VOTES Saturday Night Live in the 2010s found a new kind of balance. Even with many musical guests returning multiple times, the 20...
20 Legendary Artists Who Overcame Critical Bashing 16.5k VIEWS They say hindsight is 20/20, and nowhere is this more apparent than in the world of music criticism. Time and again, greats ...
Coachella 2011 Review - Coachella Festival Rankings 20.1k VIEWS Reviewing Coachella 2011 on-the-fly liveblogging as it happens, and ranking the highlights. Videos of the performances as we...

The Strokes is also found on...