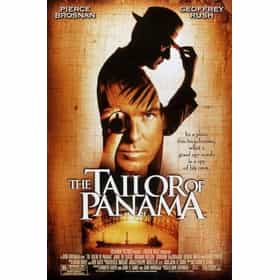 The Tailor of Panama

The Tailor of Panama is a 2001 Irish-American spy thriller film directed by John Boorman and starring Pierce Brosnan and Geoffrey Rush. Jamie Lee Curtis, Brendan Gleeson, Daniel Radcliffe, Catherine McCormack, and Harold Pinter appear in supporting roles. The film is based on the 1996 spy novel of the same name by John le Carré, who wrote the screenplay with Boorman and Andrew Davies. It was shot at the Ardmore Studios in County Wicklow, Ireland, and on location in Panama City, Lake Gatun, and Gamboa, Panama. The film was produced by Boorman's Irish production company Merlin Films, with financial support from Columbia Pictures. The movie, like the book, is inspired in part by ... more on Wikipedia

The Tailor of Panama is ranked on...

The Tailor of Panama is also found on...