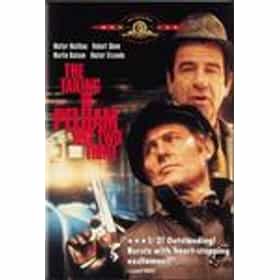 The Taking of Pelham One Two Three

The Taking of Pelham One Two Three is a 1974 American thriller film directed by Joseph Sargent, produced by Edgar J. Scherick, and starring Walter Matthau, Robert Shaw, Martin Balsam and Héctor Elizondo. Peter Stone adapted the screenplay from the 1973 novel of the same name, written by Morton Freedgood about a group of people taking hostage for ransom the passengers of a busy New York City Subway car. Musically, it features "one of the best and most inventive thriller scores of the 1970s". ... more on Wikipedia

The Taking of Pelham One Two Three is ranked on...

#1156 of 6,106 People who voted for The Taking of Pelham One Two Three... are 4x more likely to vote for Alien Franchise on this list are 5x more likely to vote for The Terminator Franchise on this list The Best Movies Of All Time 5.7M VOTES These are the best movies of all time, ranked by movie experts and film fans alike. What are the greatest movies in cinema h...
#84 of 591 The Best '70s Movies 71.9k VOTES This list of the best movies of the '70s includes all of the top films from the 1970s, including some of the best movies eve...
#541 of 581 The Greatest Film Scores of All Time 231.7k VOTES This list contains greatest movie themes and scores ever recorded, chosen by the Ranker community. (NOTE: This list is for f...
#229 of 395 The Greatest Movie Themes 81.7k VOTES A memorable movie theme song is an underrated crucial element that helps turn a great movie into an iconic one. At its core,...
#18 of 122 The Best Movies of 1974 5.2k VOTES List of the best movies of 1974, with movie trailers when available. 1974 was the year that actors Chevy Chase and Jeff Gold...
#47 of 101 The Best New York Movies 1.5k VOTES The Statue of Liberty, Times Square, crowded streets, Chinatown, multi-million dollar townhomes, Wall Street, the World Trad...
#43 of 212 The Best R-Rated Crime Thriller Movies 8.4k VOTES List of R-Rated crime thriller movies, ranked from best to worst with movie trailers when available. This list takes the bes...
#33 of 49 The Best Classic Thriller Movies, Ranked 1.2k VOTES This list contains information on the best classic thriller movies, ranked from best to worst by user votes. The best classi...
#20 of 50 The Best '70s Thriller Movies 1.2k VOTES The 1970s saw the rise of New Hollywood, and with it some of the most iconic films in cinema history. New Hollywood comprise...

The Taking of Pelham One Two Three is also found on...