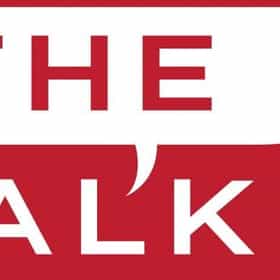 The Talk is a talk show created by actress Sara Gilbert, who also serves as the executive producer. The show premiered on October 18, 2010, and airs on CBS as a part of CBS Daytime. Along with Gilbert, the show features Julie Chen as the moderator, Sheryl Underwood, Aisha Tyler, and Sharon Osbourne discussing the day's latest headlines while usually tying in the show's theme of motherhood or at least parenthood, such as by giving their opinions "through the eyes of mothers". It also contains celebrity interviews and segments for mothers and parents in general. The show airs before a live studio audience Monday through Thursday at 11:00am Pacific Time from the CBS Studio ... more on Wikipedia

The Talk is ranked on...

#47 of 290 The Most Overrated TV Shows Of All Time 550.7k VOTES List of the most overrated TV shows of all time, ranked by fans, critics, and people like you. Ever since the dawn of the ...
#33 of 59 People who voted for The Talk... also upvote X-Men Franchise on The Best Superhero Movies Ever Made also upvote Back to the Future Franchise on The Greatest Sci-Fi Movies of All Time The Best Daytime TV Shows 8.6k VOTES The absolute best daytime television shows, ranked from the most popular to the least based on the amount of votes cast for ...
#27 of 30 What to Watch If You Love 'The Tonight Show Starring Jimmy Fallon' 42 VOTES The Tonight Show Starring Jimmy Fallon kept viewers on the edge of their seats with excellent interviews and awesome celebri...
#28 of 42 The Best Talk Shows of the 2010s 1.3k VOTES These are the best 2010s talk shows, ranked from best to worst by user votes.  From talk shows that were actually as po...
#38 of 59 The Best Talk Shows On TV 18.8k VOTES The very best talk show shows on television, ranked from best to worst. This list of the greatest talk show shows also inclu...
#9 of 11 The Best Talk Shows in LA 34 VOTES After you spend a week in Los Angeles, you'll see why so many people choose to live here 365 days out of the year. It is a g...

The Talk is also found on...