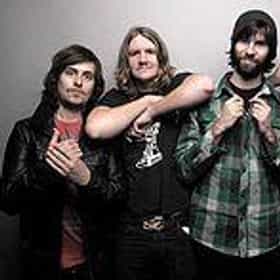 The Temper Trap is an Australian band that formed in 2005. The core members are Dougy Mandagi on vocals, Jonathon Aherne on bass guitar, Toby Dundas on drums and Joseph Greer on keyboards and guitar. In 2008, the group relocated from Melbourne to London. The band released their debut album Conditions in June 2009 to favourable reviews and commercial success; it peaked at No. 9 on the ARIA Albums Chart and into the top 30 on the UK Albums Chart. Its lead single, "Sweet Disposition", peaked in the top 10 on the Belgian, Irish and UK Singles Charts and reached No. 14 on the ARIA Singles Chart. At the ARIA Music Awards of 2010 in November, The Temper Trap won 'Best Group' for ... more on Wikipedia

lists about The Temper Trap

The Best The Temper Trap Albums, Ranked 14 votes We're ranking the best Temper Trap albums of all time. Originally from Melbourne, the Australian rock band moved to London i...

The Temper Trap is ranked on...

#191 of 561 The Most Hipster Bands 178.9k VOTES Since the mid-2000s, the word hipster has invaded the lexicon of pop culture and has become a term, for better or worse, syn...
#65 of 81 The Best Post-punk Revival Bands 13k VOTES At the end of the 1990s and early 2000s after alternative music ran its course (or at minimum wasn't nearly as popular), the...
#110 of 310 The Best Australian Bands, Ranked 165.5k VOTES Who are the best Australian bands? The best bands from Australia you'll find on this list come from a variety of different m...
#30 of 50 The Best Indie Music Trios Of All Time 95 VOTES On this list we’re ranking the best indie groups with three members. From Chvrches to The Lumineers, you should recognize yo...

The Temper Trap is also found on...