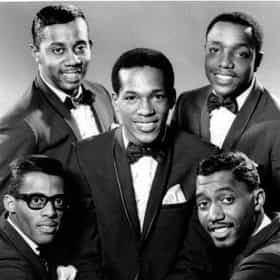 The Temptations are an American vocal group who released a series of successful singles and albums with Motown Records during the 1960s and 1970s. The group's work with producer Norman Whitfield, beginning with the Top 10 hit single "Cloud Nine" in October 1968, pioneered psychedelic soul, and was significant in the evolution of R&B and soul music. The band members are known for their choreography, distinct harmonies, and dress style. Having sold tens of millions of albums, the Temptations are among the most successful groups in popular music.Featuring five male vocalists and dancers (save for brief periods with fewer or more members), the group formed in 1960 in Detroit, ... more on Wikipedia

lists about The Temptations

The Best Temptations Albums of All Time 1.4k votes R&B group The Temptations aren't just Motown Legends, but one of the greatest soul groups of all time. List of the best ...

The Temptations is ranked on...

#78 of 277 People who voted for The Temptations... also upvote Star Trek Franchise on The Best Space Movies also upvote Star Trek Franchise on The Greatest Sci-Fi Movies of All Time Rank the Rock N Roll Hall of Fame Inductees 310.5k VOTES Update: Follow Ranker's official New Rock 2020 playlist on Spotify! A complete list of bands and artists inducte...
#200 of 333 The Greatest Classic Rock Bands 490.8k VOTES The greatest classic rock bands of all time embody the spirit of a generation of people who just wanted to rock. These top c...
#19 of 279 The Top Pop Artists of the 1960s 94.1k VOTES List of the best pop artists of the 60s, ranked. The 1960s may very well be the best decade for music in the rock era. Music...
#1 of 100 The Greatest Motown Artists Of All-Time 11.6k VOTES Nobody blends soul, R&B, and pop music quite like the best Motown artists of all-time. Founded by Berry Gordy Jr. i...
#7 of 277 The Greatest R&B Artists and Bands of All Time 26.7k VOTES A list of the best R&B artists. Though the definition of the genre has skewed over the years, at the heart of R&B mu...
#63 of 176 The Best Black Rock Bands 36.3k VOTES A list of the best black rock bands including a few afro-punk and black alternative bands. While black rock musicians and af...
#28 of 64 The Greatest Dancing Singers 120.6k VOTES We know them for their lyrical talent (or lack of) but the real question is, can they bust a move? The best singers aren't a...
#5 of 221 The Greatest R&B Artists of All Time 16.3k VOTES Update: Follow Ranker's official New R&B 2020 playlist on Spotify! When it comes to the pop charts, R&B ...
#3 of 84 The Best Doo-wop Groups/Artists 3.7k VOTES Doo-wop music is a genre of music that emanated from some of the biggest cities in the U.S. during the 1940s and 1950s. Mixi...

The Temptations is also found on...