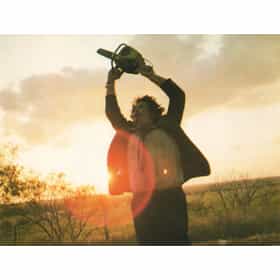 This movie is a 1974 American slasher film, directed and produced by Tobe Hooper, who cowrote it with Kim Henkel. It stars Marilyn Burns, Paul A. Partain, Edwin Neal, Jim Siedow and Gunnar Hansen, who respectively portray Sally Hardesty, Franklin Hardesty, the hitchhiker, the proprietor, and Leatherface, the main antagonist. The film follows a group of friends who fall victim to a family of cannibals while on their way to visit an old homestead. ... more on Wikipedia

The Texas Chain Saw Massacre is ranked on...

The Texas Chain Saw Massacre is also found on...