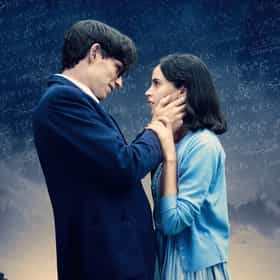 The Theory of Everything is a 2014 British biographical coming of age romantic drama film directed by James Marsh and adapted by Anthony McCarten from the memoir Travelling to Infinity: My Life with Stephen by Jane Wilde Hawking, which deals with her relationship with her former husband, theoretical physicist Stephen Hawking, his diagnosis of motor neuron disease, and his success in physics. The film stars Eddie Redmayne and Felicity Jones with Charlie Cox, Emily Watson, Simon McBurney, Christian McKay, and David Thewlis featured in supporting roles. The film had its world premiere at the 2014 Toronto International Film Festival on 7 September 2014. The film opened to a positive ... more on Wikipedia

The Theory of Everything is ranked on...

#22 of 162 The Best Movies of 2014 66k VOTES Sure there are the Oscars, Golden Globes, and a number of other award ceremonies that hand out trophies to movies that are v...
#119 of 239 The Best Movies Based on True Stories 57.4k VOTES "Based on a true story" is so commonly thrown around it's practically the new "in a world where..." as f...
#6 of 22 The Least Accurate Movies About Historical Figures 15.8k VOTES The lives of historical figures have provided Hollywood with film fodder for decades. Biographical movies aren't necessarily...
#6 of 23 Great Movies About Inventors & Innovators 348 VOTES The greatest innovators have not only reshaped the world with their inspired inventions, but they have also served as...
#1 of 36 The Best "Netflix and Chill" Movies Available Now 17.9k VOTES When you’re dating someone, or even just hooking up, going out on a date can be expensive. And if you’re just trying to get ...
#14 of 31 31 Movie Trailers That Made You Weep 369 VOTES No, you’re crying! Any movie trailer that makes a person do the ugly cry is brilliant advertising. Trailers are made to get ...
#6 of 47 The Biggest Oscar Bait Films of All Time 6.3k VOTES There are a number of ways in which a film could be classified as "Oscar bait," and not all Oscar bait movies are ...
#20 of 30 When Did the Globes Get It Right and Oscars Get It Wrong? 9.3k VOTES The Golden Globes and the Academy Awards are two of the highest honors any production or people working in showbiz can win. ...
#8 of 8 Rank the 2015 Best Picture Oscar Nominees 2k VOTES For the 2015 Oscar nominations, the Academy of Motion Pictures Arts and Sciences selected eight films to vie for the Best Pi...
#4 of 54 The Best Movies No One Saw in 2014 9.5k VOTES Let's face it, nowadays there are so many movies in theaters that it's almost impossible to see them all. Add to that the fi...
#21 of 131 The Best Dramas Movies Of The 2010s Decade 1.5k VOTES What are the best drama films of the decade? That's what this list will determine, based on your votes. We want you to choos...
#28 of 28 The Best Drama Films Streaming on Netflix 14.3k VOTES Hey, are you sitting at home looking for the best drama movies on Netflix? Great news! All the good drama films available on...
#26 of 140 The Very Best Biopics About Real People 12.2k VOTES List of the best biopics ever made, as ranked by film critics and movie fans. History is filled with remarkable individuals ...
#8 of 33 The Best Oscar Winning Movies On Netflix, Ranked 2.1k VOTES If you're looking for critically-acclaimed films to watch, here are the best Oscar-winning movies on Netflix. Featuring Best...
#4 of 21 The Best Movies About Real Scientists 1.2k VOTES This list of the best scientist biopics contains numerous highly-lauded films. Winner of four academy awards, A Beautiful Mi...
20 Historical Facts That Movies Got Totally Wrong 392.5k VIEWS History class is tough – there are lots of dates and names to remember. But when you're making a historical movie, you'...
#4 of 34 The Best British Movies On Netflix 3.1k VOTES From intense dramas to hilarious comedies, here are the best British movies streaming on Netflix Instant, ranked by Netflix ...
Films About Historical Figures That Got Blasted By Their Family & Friends 7.5k VIEWS Hollywood loves to make films about historical figures, usually because they can be Oscar-bait (and possibly because the sto...
#1 of 19 The Best Eddie Redmayne Movies 783 VOTES List of the best Eddie Redmayne movies, ranked best to worst with movie trailers when available. Eddie Redmayne's highest gr...

The Theory of Everything is also found on...