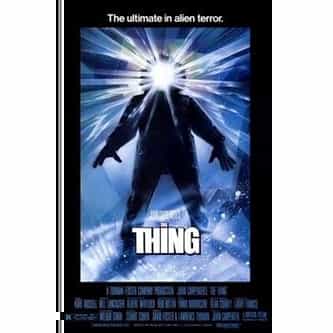 Tagline
Man is the warmest place to hide.
What you fear most... is among you.

The Thing is a 1982 American science fiction horror film directed by John Carpenter, written by Bill Lancaster, and starring Kurt Russell. The film's title refers to its primary antagonist: a parasitic extraterrestrial lifeform that assimilates other organisms and in turn imitates them. The Thing infiltrates an Antarctic research station, taking the appearance of the researchers that it absorbs, and paranoia develops within the group. The film is based on John W. Campbell, Jr.'s novella ... more on Wikipedia

The Thing IS LISTED ON