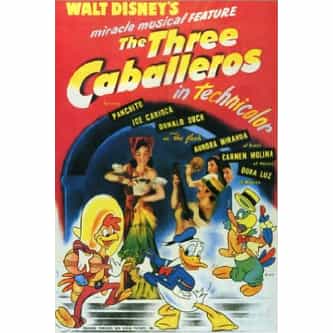 The Three Caballeros is a 1944 American animated musical film produced by Walt Disney Productions. The film premiered in Mexico City on December 21, 1944. It was released in the United States on February 3, 1945 and in the UK that March. The seventh animated feature in the Walt Disney Animated Classics series, the film plots an adventure through parts of Latin America, combining live-action and animation. This is the second of the six package films released by Walt Disney Animation Studios ... more on Wikipedia

The Adventures of Ichabod and Mr. Toad

The Three Caballeros IS LISTED ON